Messaging or message queuing is a style of communication between applications or components that enables a loosely coupled architecture.

RabbitMQ is one of the most powerful and widely used message brokers, which enables to design and develop loosely coupled, scalable and distributed applications. Not only for its popularity, but also it is used by the company that I work for(it means that there is a possiblity to encounter with a problem related to RabbitMQ and solving this problem requires at least a base level knowledge); I decided to refresh what I know and push my limits harder to gain more advanced knowledge about it. This post and the posts that will be added later with similar tags will be compilations of underlined sentences and handwritten notes from my readings while studying RabbitMQ. I have started with this book, so if you cannot persuade yourself to a sentence you have read belongs to me, definitely it is from the book. So, lets hit it.

In the above scheme, commonly referred to as messaging or message queuing, systems play the role of message publishers (producers) and message consumers. They publish a message to a broker on which they rely on to deliver it to the intended consumer. If a response is required, it will eventually come at some point on time through the same mechanism, but reversed (the consumer and producer roles will be swapped). 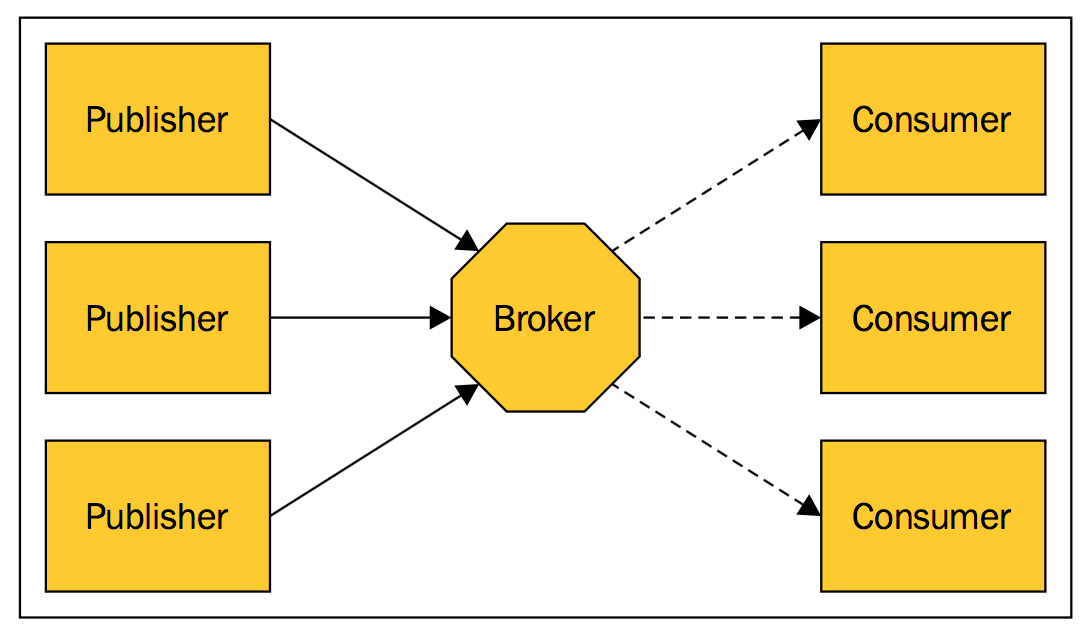 From the above architecture of a loosely coupled system followings can be deduced:

The main downside of this approach is that programmers cannot rely on the mental model of procedural programming where things immediately happen one after another. In messaging, things happen over time, so systems must be programmed to deal with it.

Broker: This is a middleware application that can receive messages produced by publishers and deliver them to consumers or to another broker.

Virtual host: This is a virtual division in a broker that allows the segregation of publishers, consumers, and all the AMQP constructs they depend upon, usually for security reasons (such as multitenancy).

Connection: This is a physical network (TCP) connection between a publisher/consumer and a broker. The connection only closes on client disconnection or in the case of a network or broker failure.

Channel: This is a logical connection between a publisher/consumer and a broker. Multiple channels can be established within a single connection.

Exchange: This is the initial destination for all published messages and the entity in charge of applying routing rules for these messages to reach their destinations. Routing rules include the following: direct (point-to-point), topic (publish-subscribe) and fanout (multicast).

Queue: This is the final destination for messages ready to be consumed.

Binding: This is a virtual connection between an exchange and a queue that enables messages to flow from the former to the latter. A routing key can be associated with a binding in relation to the exchange routing rule.

Each message delivered to an exchange first, to a queue at last.

Following figure is an overview of concepts defined above.

RabbitMQ is an Erlang implementation of an AMQP broker. Erlang has been chosen to build it because of its intrinsic support for building highly-reliable and distributed applications. Indeed, it is used to run telecommunication switches for which a proverbial total system’s availability of 9 nines has been reported (that’s 32 milliseconds of downtime per year). Erlang is also able to run on any operating system.

Apparent use cases for RabbitMQ can be multilingual, distributed micro-service architectures.